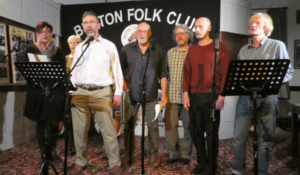 We thought it would be nice to provide a gallery and a brief introduction to our regular floor singers, so over the next few weeks we will populate this page with a photograph of each performer and some brief details about them. We hope you like the idea and find it of interest.

Arnie grew up in the 60’s when Tom Paxton still had hair, Bob Dylan was a cynical atheist & Pete Seeger was upsetting the Trumps & Putins of the day. Inspired by such early protest singer-songwriters, he mainly sings his own compositions but also covers a wide range of contemporary & traditional songs. Arnie’s repertoire is largely political but he occasionally lapses into comedy & love – lost or otherwise. He usually accompanies himself on finger-style guitar. Arnie & Denise live in East Staff’s where he helped found a writers’ group. He retired in 2014 from the composting business in Ashbourne that  brought him up from Suffolk & works a large fruit & veg plot beside the River Dove. 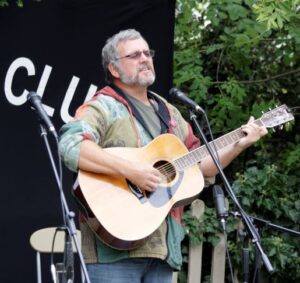 Tony Fowkes is one our longest serving Floor Singers, having been a regular at the club from October 2000. His fine voice and gentle guitar style combine to provide a very enjoyable listening experience. A great fan of Jez Lowe and the Young Uns his renditions of their songs are given his own very distinctive and individual style.

In past decades Chris has enjoyed many nights at the folk club but it wasn’t until 2017 that he performed at it. His admiration of local talent and guests had always been an influence on his attendance and he is delighted, on his return, to see much enthusiasm among performers and audience. ‘He always imagined that it would be marvellous to take part as a floor singer, so in his 60s, having taken up the guitar, is doing so.’Traditional songs are covered as well as singer /songwriter material.

We will call you back soon